Dwight D Eisenhower said: “What counts is not necessarily the size of the dog in a fight, it’s the size of the fight in the dog”.  Although he did not mean this literally, referring to a dog and its size, it's certainly true about the thousands of incredible working dogs out there. Some might be small in stature but huge in mental capabilities. There are a number of great examples of this amongst the nominees the 2021 Naturo SuperDog Awards. Let’s take a closer look at some of these hard-working and dedicated four-legged workers.

A good example of a dog whose size could be deceiving is Louis. Louis is a two-year-old Chinese Crested powder puff. Although a very unlikely breed for an assistance dog, Louis excels at his job. He has saved the life of his owner, who has physical and mental health issues, many a time. His job is to help his owner mitigate panic attacks, predict migraines coming up and he has even brought her back from fainting.

Louis is the first assistance dog that can say he has travelled in a North Wales ambulance. He is a brave little fella not scared of roping in the help of strangers if his owner needs help.

Hope has been a SuperDog working with clients with neurological conditions for eight years. She also works with prisoners, probationers, people with mental health issues and children with learning disabilities.

Hope instinctively knows what each of her clients needs, whether it is a cuddle, a smile or to get rid of energy playing ball. Her handler says she has an exceptional ability to reach anyone she works with. She is full of love for everybody no matter their past, and she shows everybody their worth.

Hope has her own book “Everyone needs Hope” because that is true about her and the work she has been doing.

In the words of her owner: “She has brought words back to those who have been mute, encouraged people to stand and walk and stopped their never-ending flow of tears. Hope truly is an inspirational and exceptional working dog.”

Although really only still a puppy and an assistance dog in training, the six-month-old Ocho has already proved himself a star in the making, as stated by his owner Chloe. Chloe is a wheelchair-using nurse. Tough Ocho is still in training, he is already accompanying Chloe to work and assisting her. He is very well-disciplined, devoted, intelligent and has complete trust in Chloe.

Who would have guessed that dogs can help with the conservation of wildlife? Working with the Hartpury University, hedgehog expert Lucy Bearman Brown, People’s Trust for Endangered Species and British Hedgehog Preservation Society, Henry has proved that dogs can be an excellent tool in protecting and surveying hedgehogs.

5. Stark  - a police officer with guts

When called out to a crime scene with his handler PC Paul Hopley, Stark got severely struck in the head multiple times by a suspect with a machete but he still managed to bite his attacker on the leg. The suspect got arrested on suspicion of possession of an offensive weapon and assaulting a police dog, taken to the hospital so his injuries could be checked and later was taken into police custody.  Meanwhile Stark had to undergo emergency surgery. Thanks to the talented team at the PDSA, Stark went on to make a full recovery. 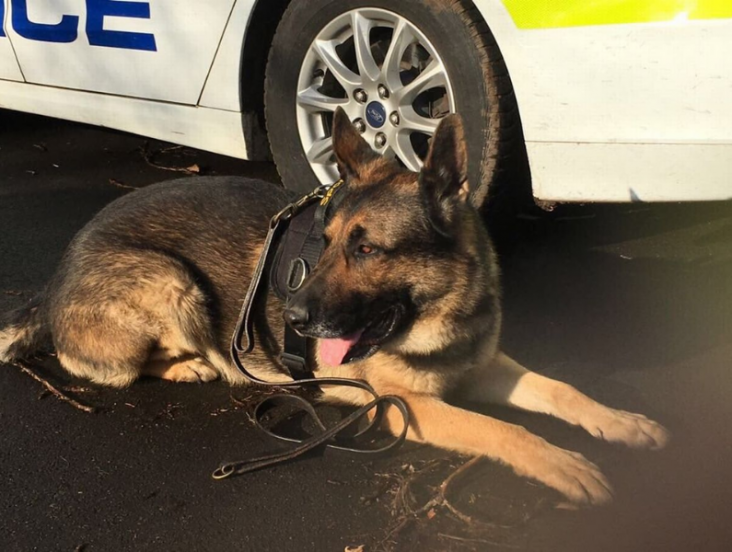 Kaizer, a colleague of Stark working at the Met Police Dog Unit, got stabbed five times in May while apprehending a suspect. Despite being stabbed, Kaiser kept hold of the suspect until he was arrested. Kaizer recuperated well from his injuries and recently has returned to work.

Leonberger’s are not usually assistance dogs but Doris is amazing. Doris’ owner suffers from PTSD and Aspergers. She helps her owner undress, empties the washing machine, picks up the mail and helps when out shopping. Doris instinctively knows when her owner needs some extra reassurance or when she needs a hug. Doris’s owner says: “Without her, I feel I would just be another military veteran statistic who found life too much.”

Hummus and his human met when he was just seven months old and his human was a young 15-years old, he has saved his human’s life a number of times. When Hummus’ human was 16 she survived a stroke after which she had to re-learn to walk, speak and feed herself. She was severely paralysed on her right side. Hummus helps her get up in the morning, helps her feed herself and literally helps her up when she falls by using his harness.

Read More: Canine Arthritis- How to Help your Dog.

Peggy used to be a herder dog but lost her hearing. She ended up at the RSPCA just before Christmas. The kennels were full, so one of the workers there, Chloe Shorten, took pity on her and took her home to stay with her, her husband, a shepherd, and their other herder dogs.

Chloe taught Peggy sign language and now she is doing again what she does best herding sheep! Chloe says: “She’s amazing and proof that old dogs can learn new tricks.”

Sauce is an Autism Assistance Dog. In the last four years, he has lived with his family, he has helped his young human a lot. He intervenes with self-harm, meltdowns, anxiety and depression by using toys as a distraction, doing deep pressure therapy through cuddles and kisses and lays beside him to help him sleep. He also helps ease anxiety by laying on his back allowing his human to scratch his belly instead of himself.

Read More: If you enjoyed finding out about these incredible worker dogs, read more about 10 Amazing Assistance Dogs